A baby light projector is the perfect soothing tool in the arsenal of new parents. It can come with a range of additional functionalities aimed at calming down a child and helping them fall asleep effortlessly.

Several baby light projectors on the market stand head and shoulders above the competition. Here are a few of the top picks and the characteristics that make them superior.

While this isn’t a strictly nursery product, it’s excellent for soothing babies and toddlers. The SOAIY Christmas Gift Rotation Color Changing Aurora Projection is an absolute best seller due to the excellent price to quality ratio.

The aurora LED night lamp comes with eight distinctive projection modes – red, blue, green and multicolor or a combination of these.

A built-in speaker makes it possible to play soothing music. Just plug into a phone, a computer or a music player for the purpose. Unfortunately, this projector doesn’t come with its own musical selection.

There are several other characteristics worth mentioning, the most prominent ones being automatic shutoff after a set period of time, an adjustable display angle, a USB port, effortless volume adjustments and a removable hemispherical cover. The projector measures 4.72 by 5.31 by 5.71 inches.

Lizber Baby Night Light Moon Star Projector is another very popular project but unlike the first one in the list, it’s created specifically for use in a nursery.

Red, green and white lights are used to recreate a soothing night sky on the nursery ceiling. The projector comes with 360-degree rotation, making the visuals turn slowly for an even more appeasing effect.

A removable white dome is available, enabling you to use the machine either as a projector or a nightlight.

Lizber Baby Night Light Moon Star Projector is powered by USB cable with charger. It can effortlessly be connected with a computer or it can run on four AAA batteries. The only downside of this product is that it doesn’t play music or soothing sounds.

This baby light projector is a bit more expensive than the previous entries in the list but a couple of the project’s features justify the additional expenditure.

Star Projector Sound Machine with Cry Detect by Calm Knight is a brand new product designed by parents who were looking for an intelligent nighttime solution. They found the solution in the form of a cry sensor that turns the machine on whenever a child starts crying.

The projector changes colors to project stars on the ceiling. It can also double as a nightlight.

In addition, this machine plays 10 lullabies and additional soothing sounds. It can be connected with a computer, giving you a chance to play other favorite songs, as well. There’s even a womb and a heartbeat program that are both particularly soothing for young babies.

The product is lightweight and it comes with child-friendly buttons that toddlers can operate on their own. It can be powered both by electricity and via batteries, which means that the projector is 100 percent portable.

A few other excellent characteristics worth mentioning include easy volume controls, on/off buttons for the cry detection mode, automatic shutoff for battery preservation and playing either of a single tune or all of the lullabies in the memory of the projector. 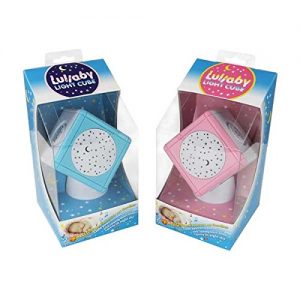 The final product in the list is the Lullaby Light Cube Baby Soother.

Available in either pink or blue, the projector can be used to project stars on the walls and the ceiling of the nursery. Star projection can continue for up to 40 continuous minutes. Typically, the machine will project on the ceiling. An additional connector is provided for the purpose of projecting on the walls.

On top of that, the machine plays different lullabies and it also has a heartbeat program. The music is touch activated for effortless controls. Volume controls are also touch activated. Lullabies and white noise sounds can be played for up to 20 continuous 20 minutes.

This baby light projector is much smaller than most of the other entries in the list. The characteristic makes it incredibly portable because the machine can fit effortlessly in a diaper bag.