Before we begin, there’s a few things you need to know about me:

#1. I am obsessed with extra terrestrial conspiracies. (I have watched EVERY YouTube video).

#2. I hate the cold. Which is saying something because I’m from Canada.

I am also a closet romantic, but we can ignore that. 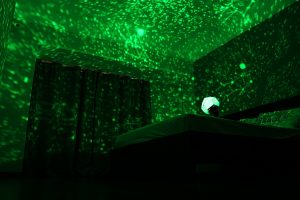 If you are anything like me and can relate with at least one of these then this next bit is for you. In the winter time, I really avoid going outside, but at the same time all I want to do it stare at the stars and fall asleep to the warm glow that they provide. If you are reading this then I know that is what you are looking for as well, because frankly I don’t know of too many people who read product articles “just for fun.”  If this is what you want, I have the answer and in the next few paragraphs I am going to give you the ins and outs of a new innovative product called the Infmetry Star Projector.

What is the Infmetry Star Projector?

The Infmetry Star Projector is an at home constellation projector, that displays a map of thousands of stars placed in random order, on your ceiling and walls.

Infmetry has been home to many affordable, unique and useful items. From toys to home accessories and gadgets. Infmetry has been serving its community since 2009 and is still growing. The word “Infmetry”  comes from combining two words “information” and  “symmetry.” Definition: Condition in which all relevant information is known to all parties involved. The team at Infmetry is committed to following the philosophy of creating a creative world, where it is possible to stimulate peoples imaginations and fuel their innovative core.

This exact philosophy is what the team had in mind when designing the Infmetry Star Projector. Wanting to create an affordable product that not only depicted a map of the heavens, but that was educational and romantic.

How does the Infmetry Star Projector work?

The ISP, as I am calling it now consists of a plastic paper globe (that you have to construct yourself). A rotating base with compass, and LED light that is powered by four AA batteries, and 110V~240V power adapter.

The rotating base with compass allows you to align the stars according to your location and the time of year. This will produce what the night sky would look like outside only instead on your ceiling and walls. Pretty cool right?

If you haven’t figured it out already…you have to build it yourself. The great thing is that the ISP comes with a step by step manual, and if you get confused by that, there is a 15 minute video on the Infmetry website that will give you a detailed walk through of how to set up the product. Another great bonus is that if it happens when you receive the projector and the contents inside are damaged or broken, you can send your old one back and Infmetry will send you a new one for you

Tip: Keep the room dark to get better performances.

At one point in time many customers reported that the halogen bulb of the star projector was too weak to project a clear image. After inquiring if it was possible to get a stronger bulb, Infmetry released a stronger more durable LED bulb to replace the original one. Now the package comes with two of the original halogen bulbs, which I take would be better if you wanted to use the projector as more of a night light, instead of light show. With one new LED bulb, that will give you a more distinct picture for those special moments.

The bulbs come in a  choice of three colours, white, blue, and yellow (golden colour).

While doing my research I came across a few reviews off the Infmetry website, that will help us determine first hand the kind of product we are dealing with. Lets take a look…

The item was a little difficult to put together as the photos didn’t match the item, but once together, the person who bought it was very happy.

It is a very cool light that is easy to put together. The LED is brighter than the standard bulbs, but still not bright enough to see in a room with any lighting. I wanted it for out wedding (star themed) but it won’t work in the reception. As a nightlight it is great.

I was really excited when I first got it which was Christmas 2014, worked better if you plug it in compared to using it with the batteries. Although it broke six months later and burned through both the light bulbs it came with.

My final verdict is this,

Because the ISP was made to be affordable it was not made out of indestructible materials, you pay for the quality you get. The circular cover you have to build may be the most fragile part,  so if you don’t like to put things together or are no good at it, this might not be for you. The reason I believe it was made this way was so that it would be easier for the customer to change the LED light themselves. Pop out/switch/ pop back in, simple as that. Some say that putting it together is easy and some say that its hard, so in the end it all depends on the kind of person you are.

In testimonial #2 we see a very discouraged bride who was not happy that the Projector did not do what she thought. In order for the projector to work its magic, there needs to be complete darkness. Any other lights and it is bound to ruin the celestial aura. Also for a venue like hers, she would have needed a few to fill the room. In the end though she agreed that it made a suitable nightlight. “First comes love. then comes marriage, then comes baby…?”

And finally, I am positive that The Infmetry Star Projector is sure to give your child an educational experience in astronomy, or just be the MOST AWESOME NIGHTLIGHT EVER!!! It will provide you with the opportunity to create a romantic experience. Inside. You know, where its NOT cold.