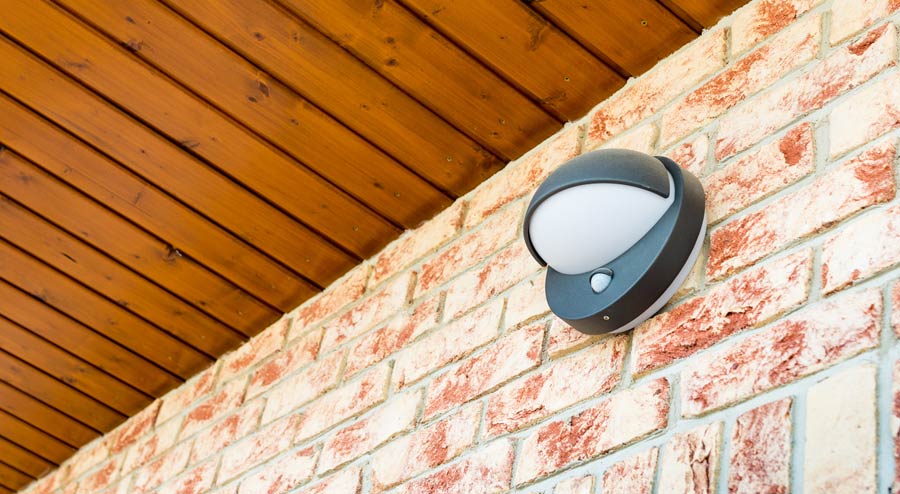 If you’ve ever gotten up during the night for a bathroom break or a drink of water, then you know the challenges of navigating your way in the dark without stubbing your pinky toe against invisible pieces of furniture.

Back in the good ol’ days, nightlights were used exclusively by children to keep the boogeyman at bay. Nowadays, thanks to technology, LED night lights are used in virtually every room of the house, and they’re also handy lights to keep on during the night.

Nightlights are simple gadgets with practical value. They’re compact, user-friendly, and can be plugged into basically every socket in your home without taking floor space or even tablespace. For some people, nightlights help in maintaining a tranquil atmosphere, ensuring quality sleep. For others, they’re the perfect hallway and bathroom illuminators when you don’t want to be blinded by bright ceiling lights.

Nowadays, nightlights come with a variety of different features. Innovative features include motion sensors, USB ports for charging gadgets, color-changing capabilities, and the list goes on. Depending on where you plan to put the nightlight, you might not need every new feature, though it’s a good idea to keep them in mind while researching or shopping around.

In this article, we’re going to give you our suggestion for the top three LED nightlights that you can use to illuminate your home. In our opinion, simple is better so don’t expect to see crazy designs, over-the-top features, and blinding lights. In addition, this article will not help provide insight on which nightlight is best for your baby’s or toddler’s room, though any of our suggested nightlights could potentially be a great choice to keep your children safe from nighttime monster attacks. 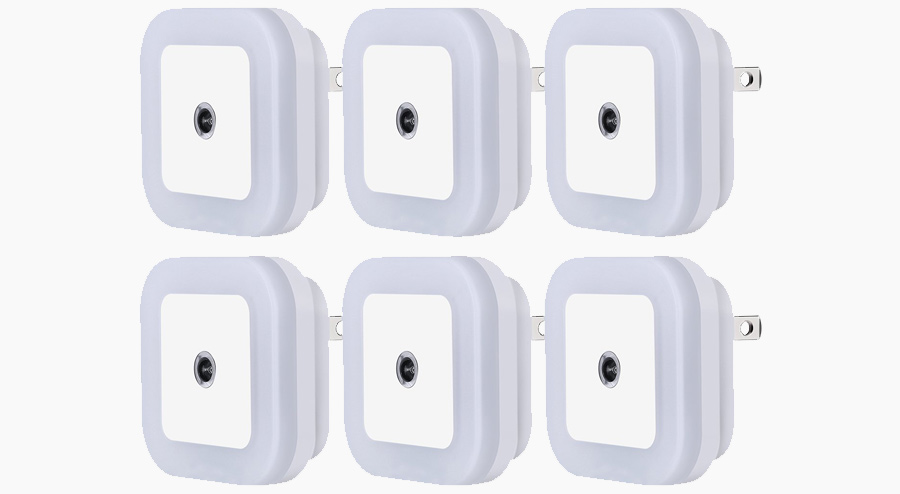 The Sycees SC01 is a great all-around nightlight for every type of room. The simplistic round-edged, square design doesn’t clash against whatever color-scheme or wallpaper motif.

One of the best features of this nightlight is its light sensor. If you’re unfamiliar with what that means, basically the LED light bulbs activate when the unit senses total and complete darkness. During the daytime, the LED lights automatically shut off to save energy. It’s a shame that this isn’t standard in every nightlight, though generally speaking, LED lights are naturally energy-efficient.

Another notable feature is the compact size of each unit (this pack includes 6 plug-in LED light units). Measuring 55 x 55 x 41 mm, while it’s plugged into an electric outlet, it won’t block the second outlet, leaving you free to charge your devices or power your alarm clock all night long.

One aspect that some people have difficulty in determining is the brightness of the LED nightlight. The great thing about the SC01 is that the light isn’t too dim, nor is it too bright, at night, leaving you a perfectly illuminated hallway or bathroom without needing to switch on your ceiling lights.

This nightlight doesn’t come with built-in USB ports for charging devices, but Sycees built this nightlight with simplicity and practicality in mind. If you’re in the market for something with more specs, then please continue reading. 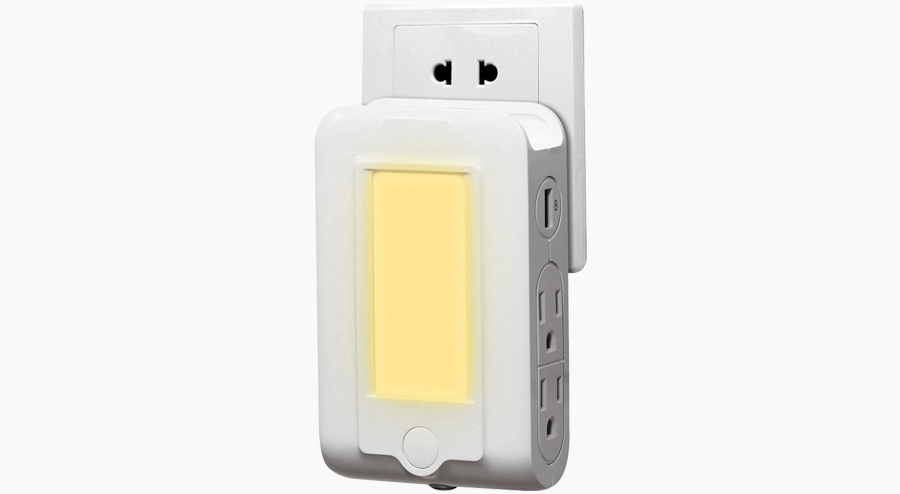 Sometimes we’re unwilling to sacrifice one outlet since it means one of our devices can’t be charged over night. With the GRDE LED Night Light, that problem is gone forever. In fact, in exchange for one wall outlet, you get four additional outlets found on the sides of this nightlight model.

The best feature that comes with the GRDE nightlight is its dawn sensor. Essentially, a sensor located on the bottom of the unit detects light coming through your room’s windows. As soon as the unit senses that the sun is up, it automatically shuts off its front-facing LED panel.

As we mentioned before, this unit comes with four outlets (two on each side). As a kicker, it also comes with two USB ports, one 2.1 A and a 1.0 A, for charging Smartphones or tablets without taking up an outlet. In addition, there’s a smooth groove on top of the LED unit where you can place your device if you don’t have a bedside table to lay your gadget on.

Similar to the previous model, the LED light offers the perfect brightness for finding your way around your room, hallways, and bathroom at nighttime. Personally, we wish that the light could be a little bit brighter, but it works just great as is.

Another thing to consider is the blocky design which, though practical, doesn’t look that great. However, despite its somewhat large size, it won’t cover your upper outlet when plugged into the bottom one. 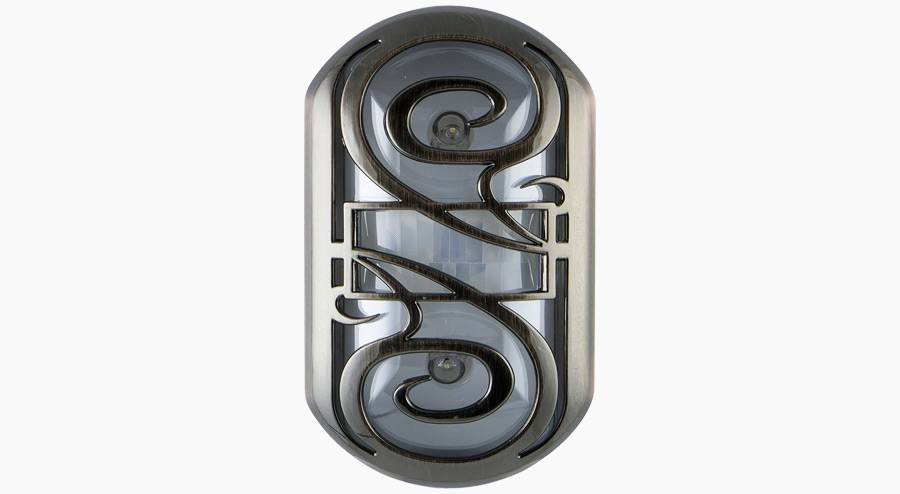 The final LED nightlight of our list is a GE-made motion-activated one. As the name suggests, it detects movement and lights up. After a preset amount of time without detecting any motions, it’ll shut off automatically.

This is what most people visualize motion sensor-nightlights to be. You only want to use as much light as you need, and seeing as how you’re stumbling blindly around your home at night, you’ll want a light to light up your pathway only when you pass it.

The motion sensors detect movements from up to 20 feet away from the unit. Of course, any passing pets or will also trigger the lights to automatically turn on, but that’s not a tremendous issue to worry about.

Even though it comes equipped with high-tech motion sensors, that’s pretty much all it has going for it. It’s not necessarily a bad thing (in fact, we love it!), but if you’re looking for nightlights with charging capability, you’ll have to look elsewhere.

The design of the unit is, in our humble opinion, an eye-sore. The black trim around the edge makes it way too noticeable for our liking during the daytime, but in the ends, it’s the performance that matters the most. We’re happy to say that the motion detectors aren’t always accurate from up to 20-feet away, but it does a great job from distances of up to 18 feet. In addition, this unit doesn’t come with an on/off switch, nor does it come with a light sensor, meaning that you need to manually unplug each and every GE LED nightlight when during the daytime.